Drew, and his wife Anita, bought Colorado Plastic Products in September 2005.  Drew brings over 30 years of senior operating experience to the company, particularly in custom fabrication.  Drew has previously held positions at the University of Pennsylvania, Vet Tech Labs, Wall Technology, and Owens-Corning. 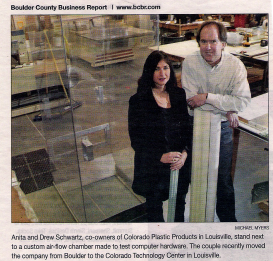 Drew holds an MBA from Georgetown University and has been a Colorado resident since 1994.

Anita Schwartz directs marketing and outreach for the company.  She also works for The Nature Conservancy’s India Program. Charlie is responsible for following up on your quote requests and coordinating fulfillment of orders. He maintains the production schedule and does program management on those fab projects too. Charlie has worked at Colorado Plastics since June 2012.

He came to us from the Poodle Preserve in Cotopaxi, CO around 2007.  He spent his days alternating between his blue bed and his faux-zebra bed in Drew’s office.  Hunter recommended an article in The Economist magazine entitled Manager’s Best Friend.  It explains one researcher’s experiments to test his theory; that having dogs in offices might make people collaborate more effectively. Maddie came to us from Summit Dog Rescue on 12/24/18 when she was just over a year old.  She was picked up off the street in Texas in October 2018 where she spent about a month in a shelter called For The Love of Animals in Bay City, TX. Her hair was so matted that they named her Maddie. Then she was fostered by Lisa and Jerry Ourada before finding her forever home with us about a month after that.  Maddie loves to play, especially with her double tennis ball tug toy and anything that squeaks.  She also loves bully sticks and frozen baby food in her bright green Kong.

We recently learned, via DNA testing, that Maddie is 50% miniature poodle, 25% bichon and 25% something else undetermined; Drew thinks Jack Russell terrier.

Our Commitment to the Environment

Plastic is designed to last for years.  It is primarily made from precious natural resources like oil and natural gas, which means that it is very important for us to make sure that as much of it as possible stays out of our landfills.

We take our commitment to the environment seriously and act on it to reduce wasted plastic.  Some of the ways in which we demonstrate our dedication to sustainability are by:

Additionally, Drew is a member of the Environmental Committee of the IAPD.  You can read more about that committee’s work here.
Colorado Plastic Products is proud to be an Ecocycle Zero Waste Community Partner.

Contact Us today to request a quote or learn more about our range of services and products.